The Depth of Night 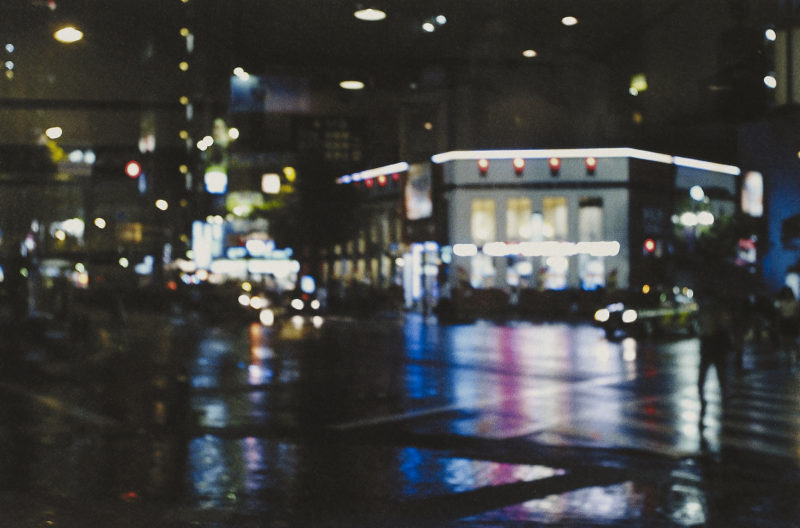 A woman became smaller, transforming into a speckle, and vanished.
Hanging veil-like, an obscure impression of that instant she became invisible lingers amidst that vast space. The night is deep. But, night only exposes its exterior. Colours quietly soak into that photo known as night. From twilight, with it intermingling golden rays, until menacing pitch-black darkness, night quivers in a range of tones. Colour mysteriously invades, gradually changing hue.

Darkness creeps along the streets, as city-lights twinkle in water puddles. One can hear a man murmuring like an ashen, drunken corpse beside a manhole. He chases the dazzling legs of the passing women. Night-light shines upon dusty bushes beneath the girders. Whitish light is reflected in a water tank filled with dull artificial flowers; a man and a woman are asleep. A paralysis-like sensation continues, lured by mysterious feelings, the pale fading dream of a lost mystery, slowly traces the dream’s shattered headlights.

Through these photos, the night’s sighing trouble our minds. As the eyes of the living dwindle, the eyes of the dead, ever-silent toward the living, awaken. By tuning into night’s stratagems, memory will once again bear fresh meaning. Blurred images, blinding lights, rough textures, abandoning momentarily the living eye; embryonic movement of the soul of the dead enters that aperture. Embodying the depths of the night, the trembling of the gliding soul attaches itself to the image, revealing those secrets. My sole wish would be for it to keep colouring.

The woman gradually fades into the distance, and vanished. Her shape diminishes, eventually spreading like moiré, wrapped in a veil of darkness. And pursuing that image. As though distance and focus were caressing. Still powerless, the hand is released a little into the night, as though it were just slightly grasping that distanced image.