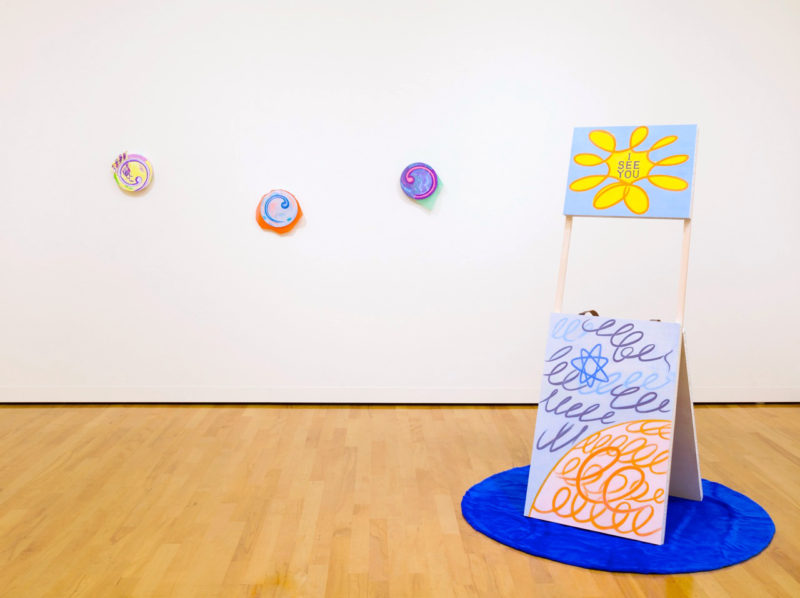 This solo exhibition will display Shirai’s paintings in which elements of nature such as heaving waves, swirls, and atmospheric flows are translated into variations of vivid colors and shapes, in addition to three-dimensional artworks and reliefs which suggest the grand expanse of the universe, but are created by employing the shapes of ordinary things such as signs, marks, and playing cards. By assuming and introducing a grand perspective from tens of thousands of light years, the time and place on earth at present is perceived as peculiar with a perception gap, and her artwork starts to bear an unquiet but humorous mood.

Starting from the 90s, Shirai has explored and created artwork regarding the boundary where nature and everyday symbols of civilized society become interchangeable. She continues to pursue and update her views regarding the relationship between human existence and time and space through varieties of media, such as three-dimensional artwork as a boundary monument which suggests the possibility of opening up finite time and space towards its external world, and video artwork in which famous fiction and historical fact are intermingled to suggest the relationship between art and the Japanese desire toward modernization while presenting the actual intensity of physical bodies. In recent years, she has been creating paintings and tapestry-like artworks in which different times are interwoven within one limited plane, while suggesting an astral body, wave motion, and a sense of infinity.